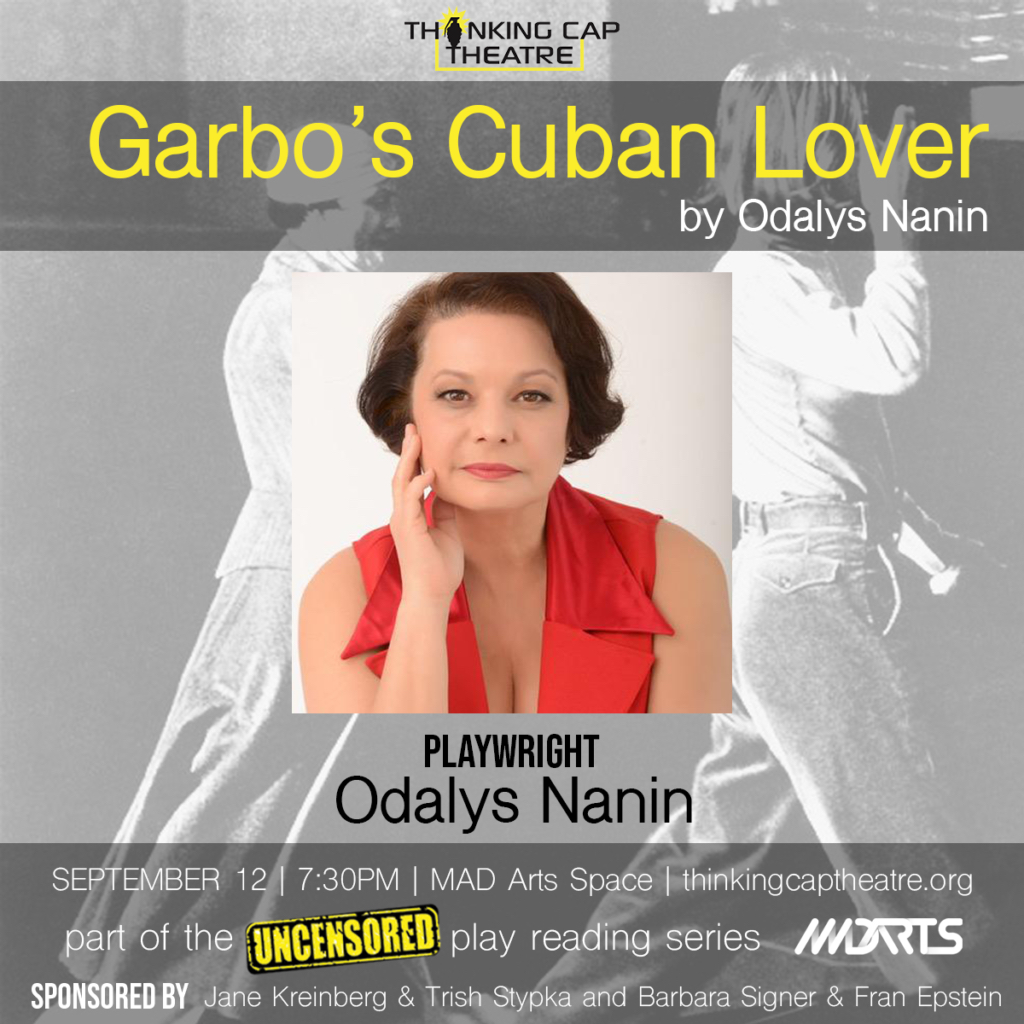 Doors open at 7:00pm. Staged reading of play will begin promptly at 7:30pm.

“an intriguing . . . portrait of romantic obsession and the attraction of opposites, skillfully shaped with emotionally probing dialogue.”

Via three enigmatic personalities of Hollywood’s Golden Age, this play explores the passionate and

ODALYS NANIN is an award-winning playwright, director, producer and founder/artistic director of Macha Theatre/Films. She has written ten plays to date: Love Struck, Garbo’s Cuban Lover, The Nun and the Countess, Beyond Love, Skin of Honey, The Adventures of the Lieutenant Nun, Naked in the Tropics, Lavender Love, Marilyn: My Secret, and The Judy Garland Show. She’s also a Filmmaker and has written three screenplays and produced two short films. Ms Nanin’s plays have garnered LA Weekly Pick of the week, Backstage Critics Pick, LA Times Critic’s Choice, Best play by The Advocate and Curve Magazine. She was chosen by OUT Magazine as one out of 100 that made a difference in 2007. Ms. Nanin is the recipient of three Drama Log theatre awards (for acting, directing, and producing), the Maverick Award (Women’s Theatre Festival), and the Pat Parker Arts Award from (Christopher Street West). For more about Ms. Nanin please visit: www.OdalysNanin.com

We use cookies on our website to give you the most relevant experience by remembering your preferences and repeat visits. By clicking “ACCEPT ALL”, you consent to the use of ALL the cookies. However, you may visit "Cookie Settings" to provide a controlled consent.
Cookie SettingsREJECT ALLACCEPT ALL
Manage consent

This website uses cookies to improve your experience while you navigate through the website. Out of these, the cookies that are categorized as necessary are stored on your browser as they are essential for the working of basic functionalities of the website. We also use third-party cookies that help us analyze and understand how you use this website. These cookies will be stored in your browser only with your consent. You also have the option to opt-out of these cookies. But opting out of some of these cookies may affect your browsing experience.
Necessary Always Enabled
Necessary cookies are absolutely essential for the website to function properly. This category only includes cookies that ensures basic functionalities and security features of the website. These cookies do not store any personal information.
Non-necessary
Any cookies that may not be particularly necessary for the website to function and is used specifically to collect user personal data via analytics, ads, other embedded contents are termed as non-necessary cookies. It is mandatory to procure user consent prior to running these cookies on your website.
SAVE & ACCEPT